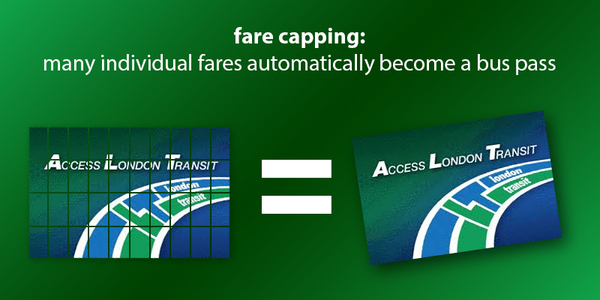 In some cities, rather than buy a transit pass for the day, week or month, a person can pay for individual fares and when they've paid the equivalent of a pass in fares, they automatically have a pass.

So, a London example could look like: Say a person qualifies for the discounted $52/month bus pass, but can't afford to pay for the pass all at once. They pay 2 individual fares on the bus each day for 14 days. ($1.90 x 27 = $52.65) Since they've now paid the equivalent of a pass, they're able to ride "for free" for the remaining two weeks of the month.

In other cases, it would simply be a way to keep transit flexible for people whose schedules aren't always predictable, and help people to stop worrying about conserving tickets/transfers and just use the bus to get around the way they'd like.

Memberships aren't officially open, but you can pre-register now. You'll be able to opt out later if you choose.